The existence of the traditional Vossaøl, a.k.a. Juniper beer, Kveik beer, Heimabrygg (homebrew) or Western Norway Farmhouse Ale, is a result of the brewing traditions in the valleys of Western Norway.

Fermented with Kveik, the now famous beer yeast, the Western Norway farmhouse ales has been made this way since before the Viking age.

According to the beer writer Michael Jackson "It is the Missing Link between modern brewing and the first beer in Mesopotamia, 6000 years ago!". He visited Voss and the local farm brewer Svein Rivenes in 1991, and joined Svein for a brewing session and tasting at his farm.

Even when modern breweries introduced their products on a large scale and wide distribution, some resilient local brewers kept the traditions alive. Without their work and knowledge, both the kveik yeast and knowledge of the brewing techniques would have been lost forever.

The old farm brewers didn't know what modern DNA analysis has recently shown us: The Kveik yeast is indeed unique in the world! It is a whole new branch on the family tree of beer yeasts.

We invite you to take part in this long tradition, and join us for an experience in our Eldhus, to learn the traditional way of kveik brewing, or just sample some kveik beer.

The juniper is harvested fresh in the woods before brewing

The heimabrygg, a.k.a. Western Norway Farmhouse Ale are made by adding juniper to the mash water. The juniper infusion, called "Sprakalog", has a pleasant sweet herbal taste and aroma.

We also use the branches as a natural filter, known as "rost", in the mash tun to keep the malt grains from clogging the tap.
The juniper is harvested fresh in the woods before brewing. Both the thin branches with needle-like leaves, and berries (seed cones) are used. They release tannins, resin and essential oils that flavour the beer.

The Sprakalog also has anti bacterial properties, and has traditionally been used for disinfecting brewing equipment and utensils.

Smokehouse with people not drinking beer. Painting by Adolph Tidemand.

The smokehouse on a farm were usually a dwelling house with an open fireplace. It is usually built of timber, and has an open hearth in the middle of the room. The walls are usually lined with benches, and the smoke leaves through a smoke hole in the roof, known as a "Ljore".
In Voss, people are proud of their roots and history. Local food traditions of curing and smoking meat and sausages has kept the smokehouses intact on many farms, even when modern living and electric cooking stoves was introduced.

As a side note; if you ever come to Voss in the autumn, take a walk in the "suburban" part of central Vossevangen, and see how many households has tiny smokehouses in their gardens and backyards, often with a smoke drifting form it's roof.

The amazing fact that these old, "redundant" houses has been maintained and remains in use together with the original brewing tradition is really what makes it unique in the world today. We welcome you to join us for taste of kveik beer in our eldhus, or maybe stay the night in Gamlahuset.

A romantic depiction of a smokehouse. After the battle of Stiklestad, Painting by Nils Bergslien.

The kveik yeast is a living symbol of centuries of brewing traditions in Norway. It has survived thanks to a strong culture of brewing farmhouse ale the traditional way among farmers in the valleys of western Norway. Without this living tradition, the kveik would have been extinct.

The norse sagas tells us of a ripe brewing culture, and the written laws of the viking age documents how important the beer was in the rituals of the norse calendar.
The law of Gulating (900 CE) demands that each farmer must brew beer for the four festive seasons of the year, and the law of Frostating (1000 CE) lists the penalty for stealing hops, an important ingredient in beer.

The culture of brewing has been widespread across Scandinavia since before the Viking ages, but modern society has replaced the homebrew in most places. Only a few communities in western Norway - the Vestlandet - held on to the traditions using kveik for brewing.

The traditional kveik yeast has always been a shared resource. If one farmer's kveik went bad, the neighbour would lend a fresh sample. According to local customs, one should not say thank you for a sample of kveik - that could bring bad luck to the brewer, or jinx the beer. The best way was just to help one self with a bit of kveik from the neighbor's brew house.

The traditions, and the kveik, survived only because of a strong cultural identity and pride in its heritage. The people of places like Voss has also kept another tradition important to the survival of kveik; the smokehouse. Local food traditions of curing and smoking meat and sausages has kept the smokehouses intact on many farms, even when modern living and electric cooking stoves was introduced.

The kveik can ferment at much higher temperatures than other yeast without causing off-flavors. Ordinary brewer's yeast will usually produce off-flavors above 25C (77F), but kveik can go as high as 43C (109F) without ill effects.

“One should never say thank's for the kveik if a fresh sample had to be borrowed from a neighbour. That might jinx the beer.” 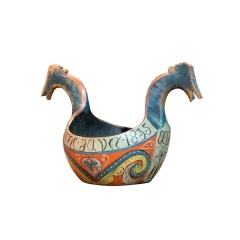 Around Norway, the local farmers has grown hops for a thousand years or more, as the law of Gulating (pre A.D. 950) demanded each farm to brew beer for the festive seasons of the Norse year, and the law of Frostating (A.D. 940) describes punishment for those who steal hops or apples.

There are known to be more than 850 local hop variants around Norway.

In medieval times the tax collectors would summarise each farm and village's capacity to grow hops, so it was an important crop. During the 15th century the law demanded each farmer to clear land, and plant 10 hop-plants each year.

Around Voss there are a few farms growing local variants of hop for brewing, as well as modern hipster hops.

Similar wooden bowls are known from the orient and Europe. They have probably entered ancient Norway through Russia and the Svea-kingdom.

Different styles of decorations appear around Norway, but a kjengje from Voss will always have horse heads decorations.
The "Kjengje" is mentioned in the old Norse sagas, and has its roots in Norse ritual vessels, the horse heads reperesents the gods, and symbolise fertility.

Horses were sacred to the old Norse, and eating horse meat was an important part of the sacred ceremonies known as Blót. The use of horse heads on the kjengje is a sign of how the old norse traditions remained in folklore, even after christianity became the main religion.

Kjengjes were made in different sizes, small ones for personal use and larger ones for festivities.

Some of them spectaculary large, and used for cheerful competitions; only those who could lift the kjengje full of beer with one hand, and drink from it without spilling beer were worthy of the honour!

Sacrifice – paying tax to the elves

People living in ancient Norway had a very strong belief in the existence and influence of the supernatural. Even just a few generations ago, the farmers around Voss made ritual sacrifices when they slaughtered animals, or brewed their beer.

The sacrifice has the form of "paying a tax", rater than worship. If you don't pay respect to the elves, known as "Vette" or "Nisse", they could make the beer go sour, or the meat go bad.
When we brew in the Eldhus we stick to tradition, and always pour a cup of wort on the doorstep for the elves guarding the door - "Dørakjerringi", and the first scoop of sweet wort from the mash tun must be thrown in the flames under the cauldron. We certainly don't want a spoilt brew!

“"Here's a taste for you!" the old brewers used to say when they threw a scoop of wort in the fire.”

After 3 days of fermentation the kveik beer is ready to be shifted from the Gilså, the fermentation tank, to kegs.
Sometimes this even evolves into a small celebration, and it is always a popular get-together.

According to tradition, anyone passing by the brew house must be offered a taste, otherwise the beer would turn sour or leak from the keg.

In traditional farmhouse brewing, the neighbours would notice the brewer preparing a brew day; picking juniper and carrying malt sacks. When the smoke rose from the brewhouse they knew they could count the days to Oppskóka, usually 3 days, and rumors of the upcoming event would spread by word of mouth.

In some areas the tradition required the brewer to bring a keg of beer around to the neighbours for tasting. He would off course be treated to the best food, and had to join in on the tasting as well. The trip back home could sometimes get a bit difficult.

The Uppskóka has it's tiny rules and rituals – the brewer should be modest, and make excuses like "I had too much water in", "there were too many helping hands carrying water" or "it was too close to the creek, and too far from the malt sack".

The guests would praise the beer and the brewer, usually with a comment about the taste – "It was a bit on the sweet side", "there was a bit too much/litte hops" and maybe "It was very drinkable".

But most importantly - the beer would be praised for being "moreish", to have "Meirsmak".

“The guests at an Uppskóka would make flattering remarks like "This beer really kicks" or "You had a long way to get water for this brew", if the beer was thick and strong.” 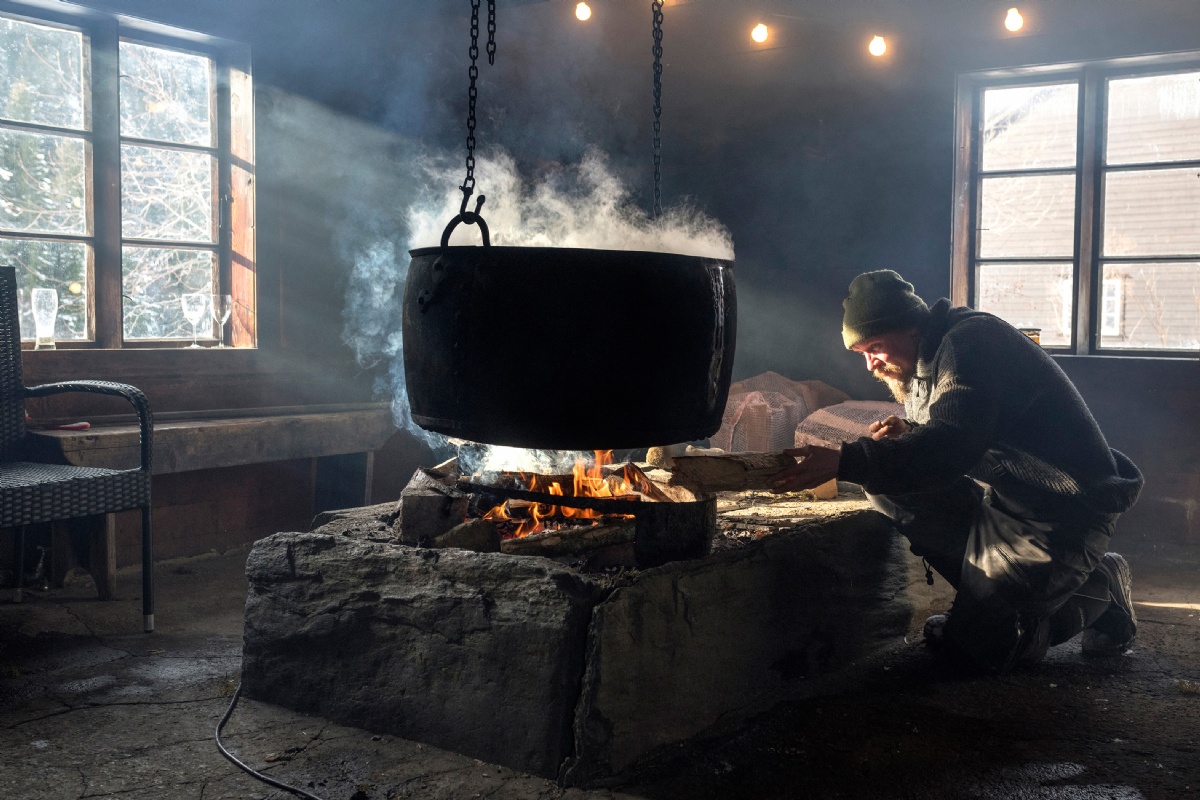 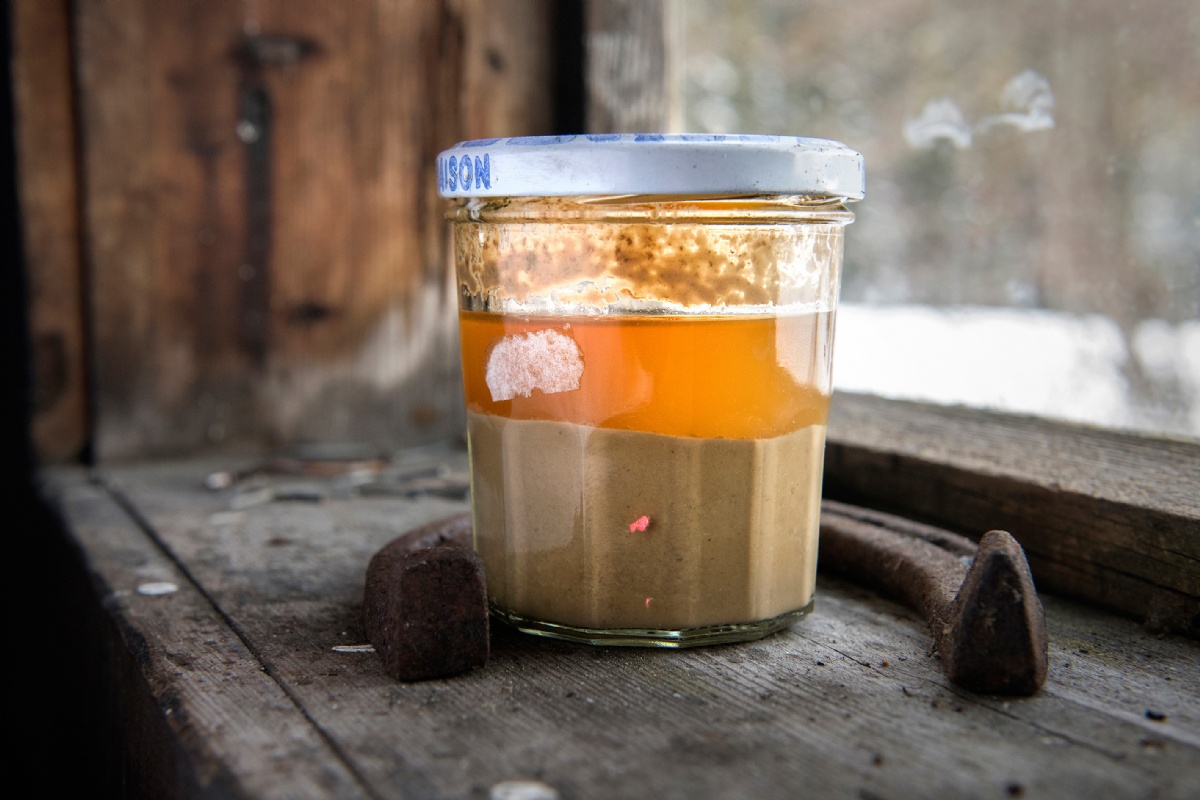 Kveik yeast in a jar, brewhouse in Voss 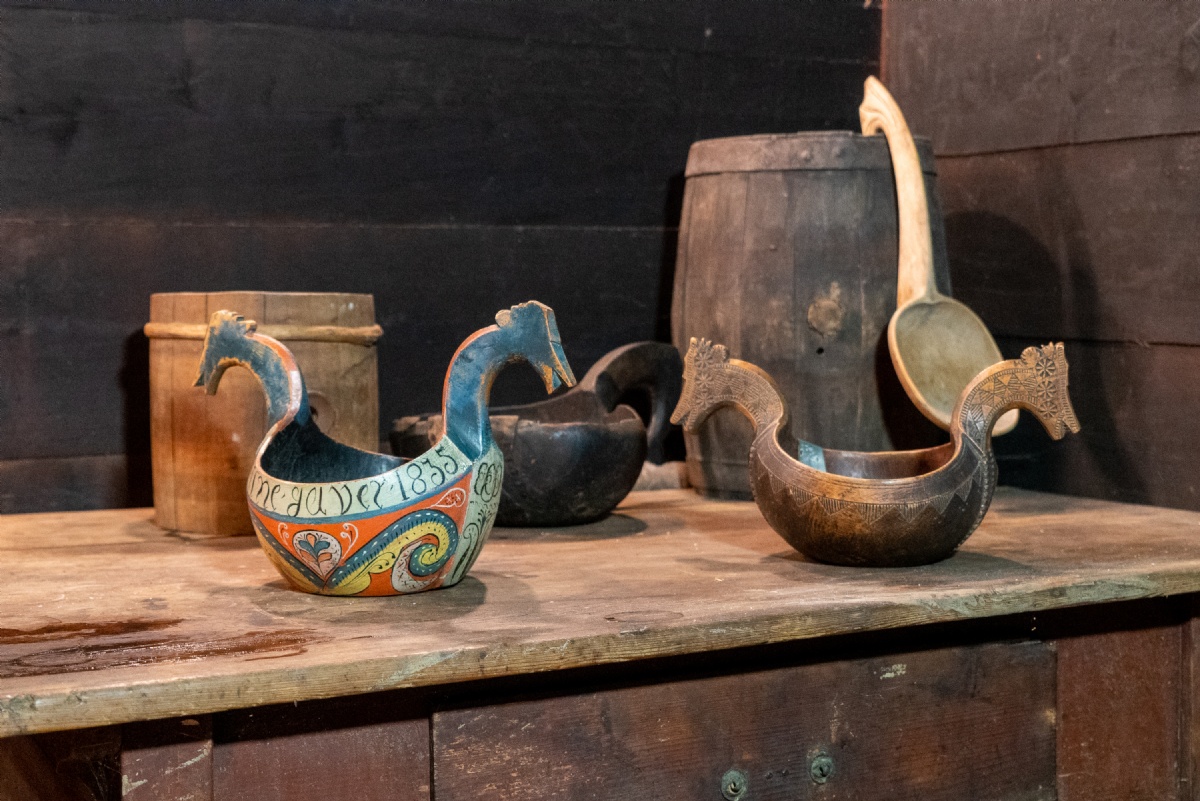 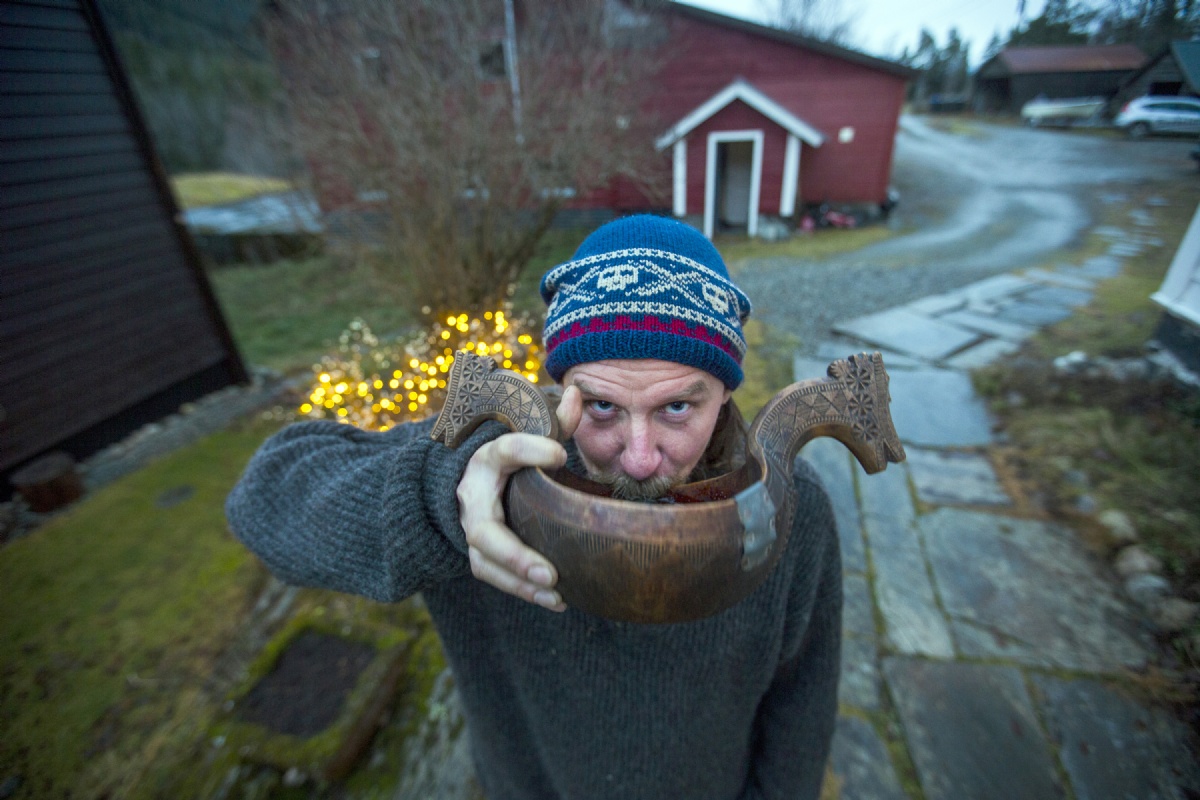 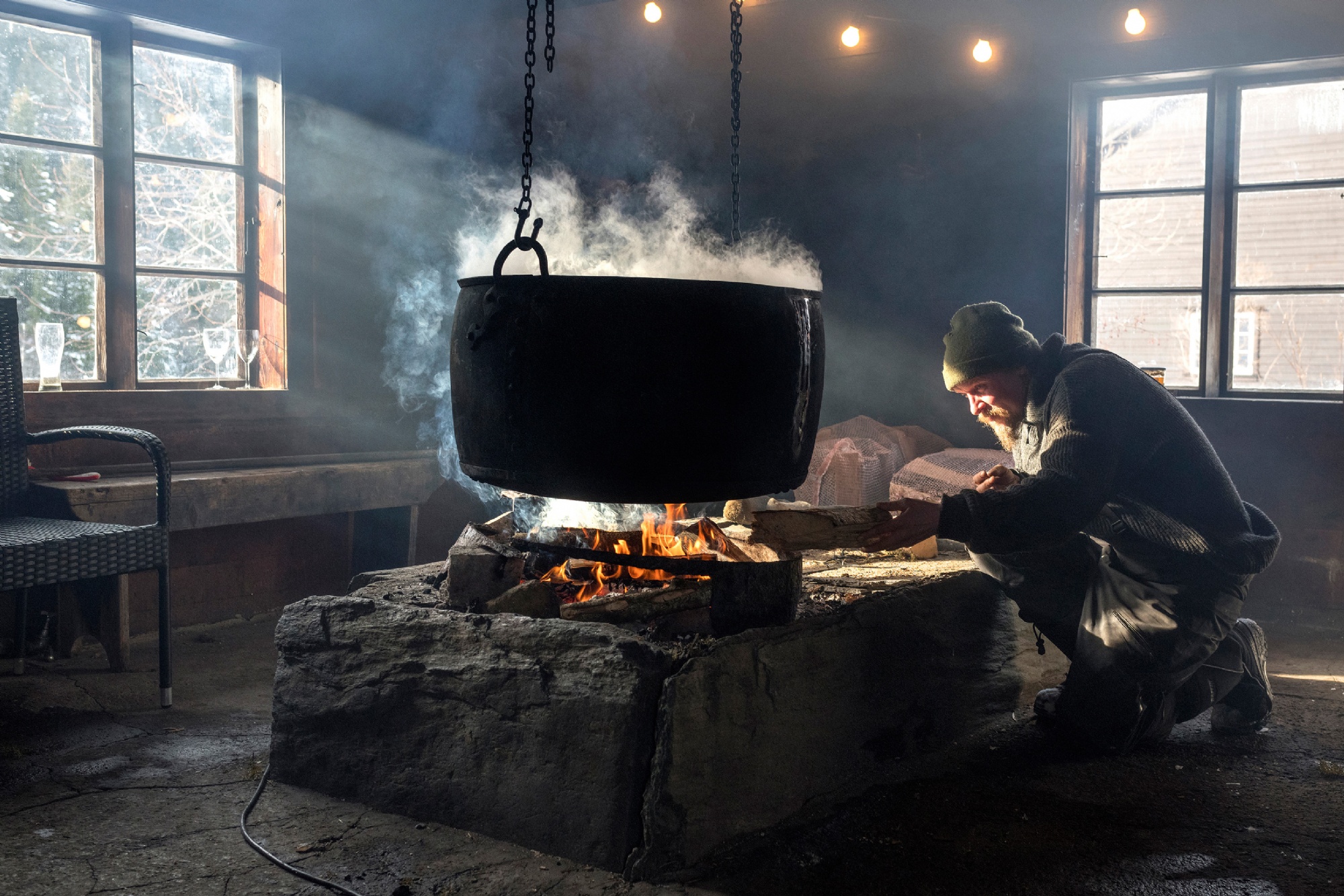 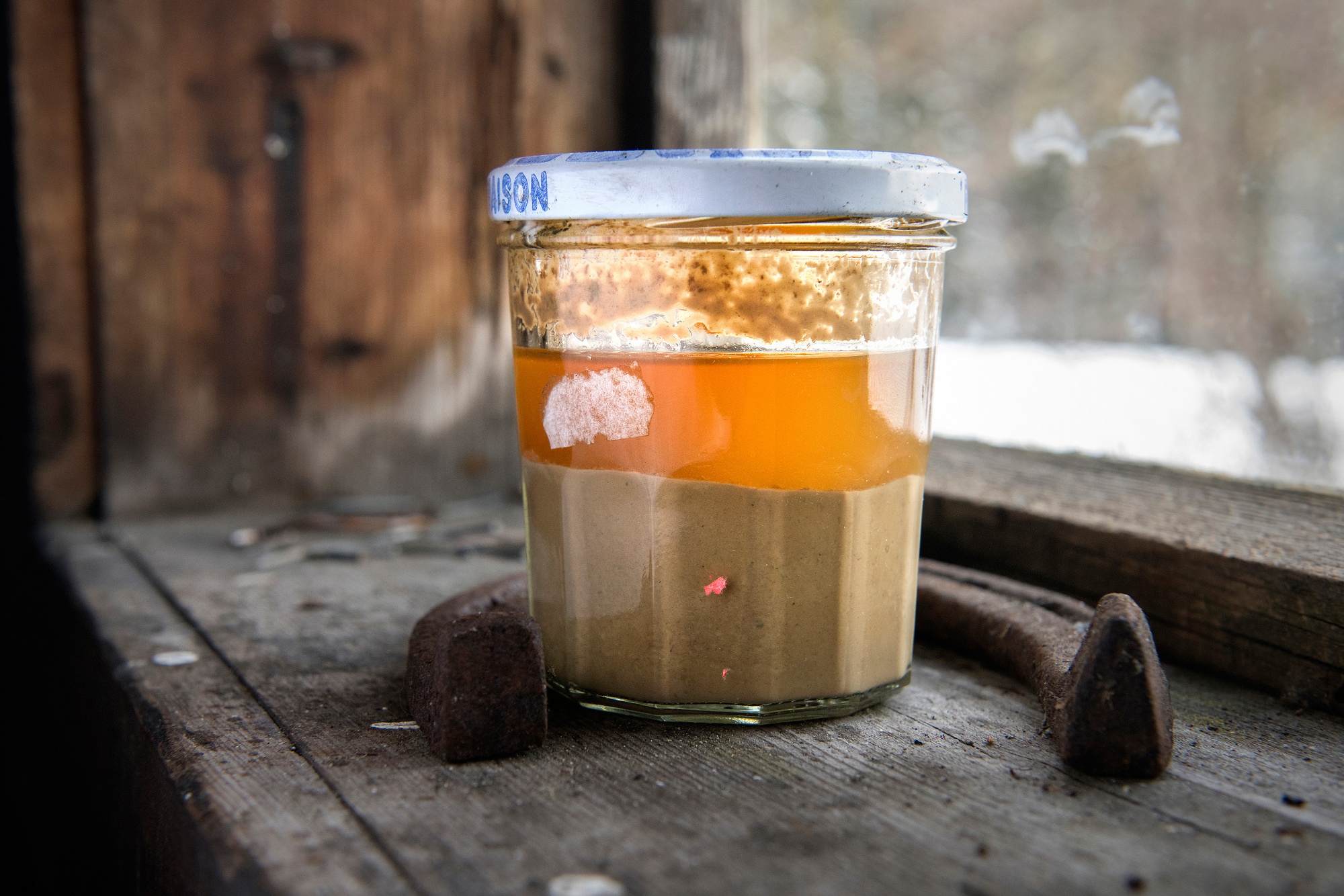 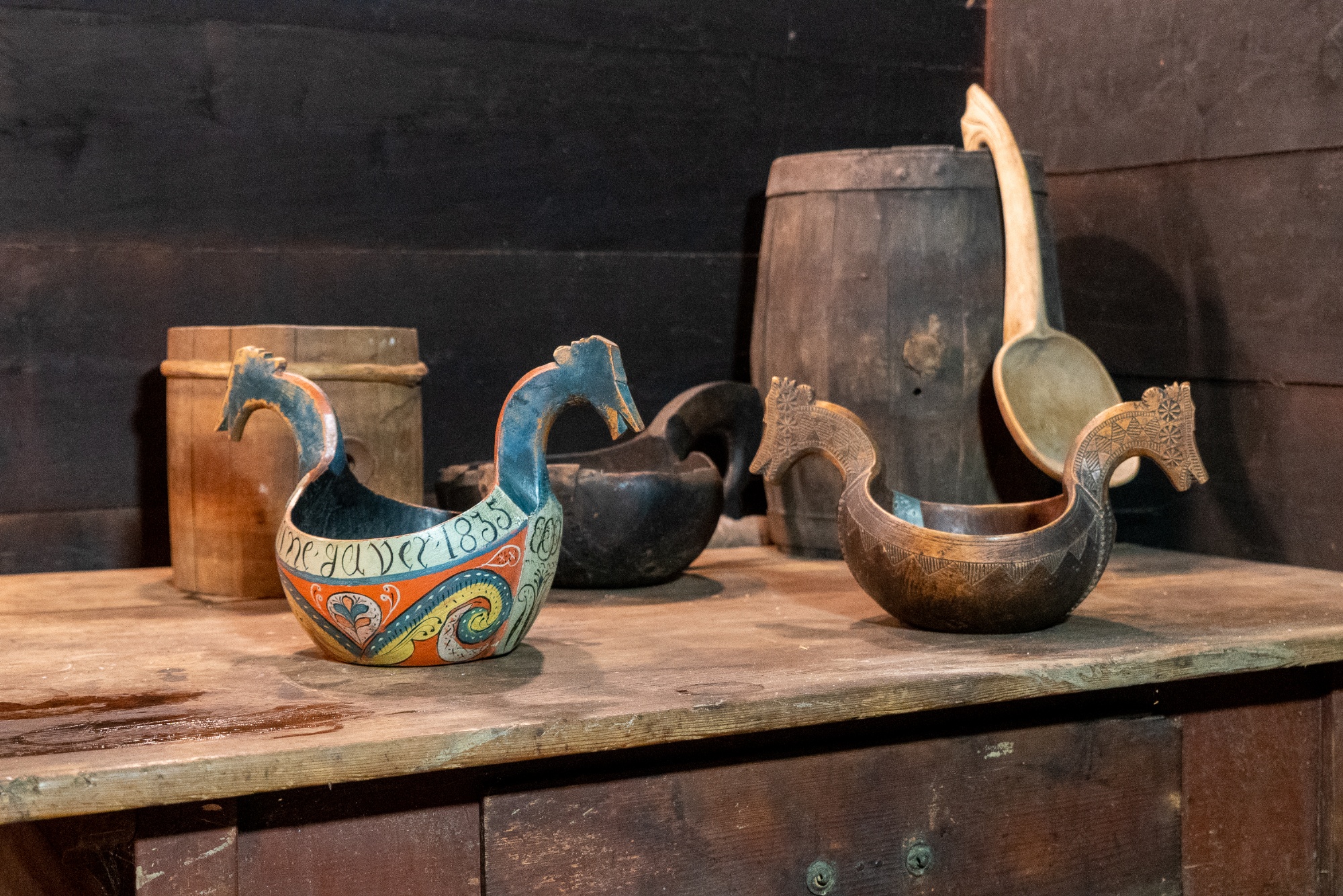 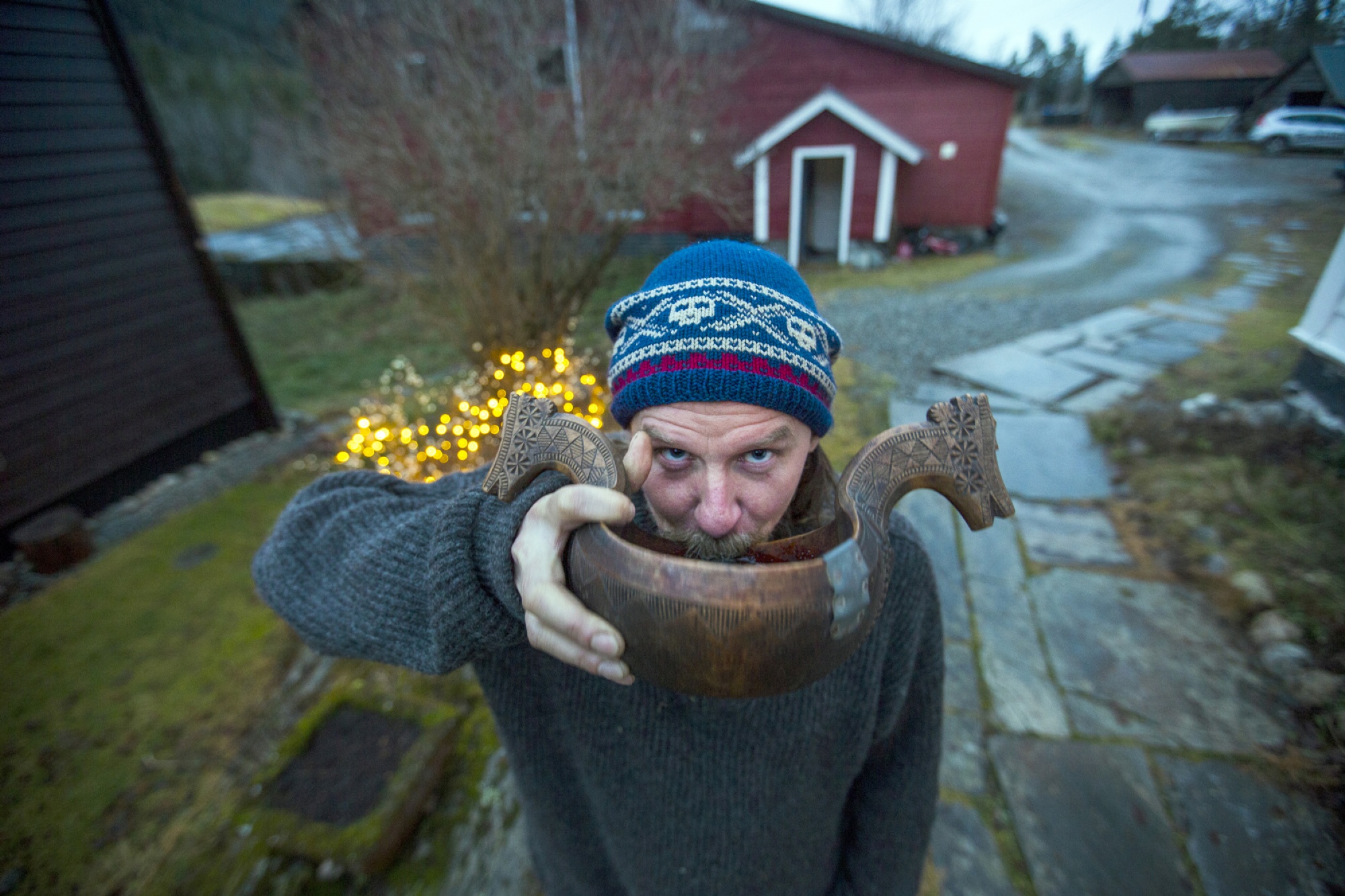